Orlando Castaneda, the proprietor of Orlando's Music, LLC, started his apprenticeship in 1969.  For years he worked as a salesman and repairman for popular music stores throughout the Los Angeles area.

In 1988 he opened Orlando's Wind Instruments as a repair shop for woodwind and brasswind instruments.  By adding other technicians able to fix and make acoustic and electric guitars, more musicians took note of the company. And when the orchestral instrument luthiers joined, it developed a new variety of clients, orchestral and mariachi. With 6-8 well experienced repair technicians, all capable of performing complicated repairs and doing custom work for customers, OWI had become a full-service music shop and store, repairing and selling a variety of musical instruments. Although the name, Orlando's Wind Instruments, is still recognized, the company took on a new name, Orlando's Music Shop.

In the late 1990’s Orlando began a new venture.  The company branched out into designing and making musical instruments, through partnerships. In turn, the Orlando U.S.A. line was born through a partnership with a manufacturer and a sales company. This brought about a wholesale and later a retail store front to the company.  The company became incorporated as Orlando's Music, LLC and both names were put under the Corporation umbrella.

The continued success of OMS is due to all the happy customers that spread the word of the OMS customer care and service. The fast and high quality service is given due to the belief that everyone should have an instrument in their hands to be happy making music.

We work hard so you can Play!!!

You can find us here: 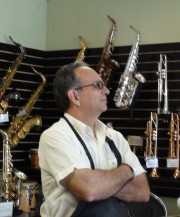 We are happy to present to you our new Internet site.

Come to our next dates and see us perform! 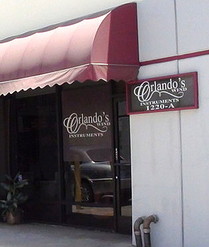